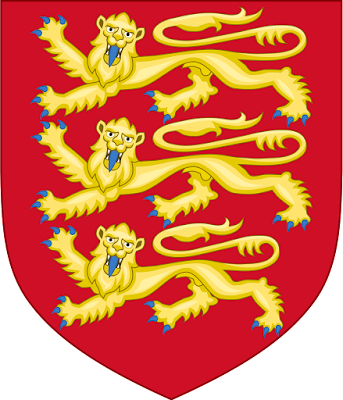 Continuing my adventures into long-form fiction, I've fixed up the first chapters of the book and present them here for your amusement.

You can reach me through my email, which is linked through my G+ page, which you can find through the link on the top of the sidebar. I am very happy to hear from you if you have some criticism of what I've written.

You can see the original post which explains the book a little and provides some examples of the inspirational artwork I have found at this link.

Our friend Caty joined us for her maiden voyage into RPGs. She cast charm person on a goblin and bam! She had a very stupid henchman, but moderately useful because he could navigate through the other goblins. His name was Snotrocker. Sadly, he died (it was the best day of his life.) Caty's character kept his decrepit rusty short sword as a souvenir of the several Turns they spent as best friends.

Later, they fought a bugbear and his goblin minions. I do the pumpkin-headed long and stringy bugbears. I showed them this picture. 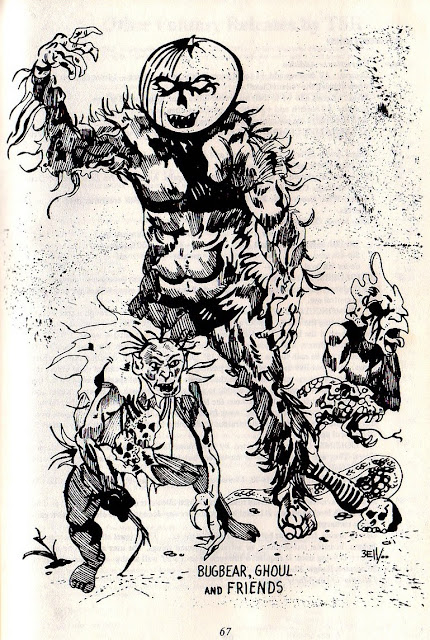 To their credit, they attempted parley, but they got a terrible reaction check. So it was a fight! And Caty's wizard threw the Sleep bomb. SHWAZOM! Dead!

So after they killed it, Caty says, "I'm going to take the seeds."

"From his head. I'm going to take the seeds from his pumpkin head and use them in my magic."

So I have decided they are Henchman Seeds.

Bugbear's heads are filled with seeds. They look like pinkish pumpkin seeds. If you take 2 Turns to vivisect it, you can grab out a few big handfuls of seeds weighing 1 lb.

If you plant these in your lab or a hothouse, 1d4 bugbear henchmen grow in 3 months.

Or you can sell them for 500 GP if there is another wizard or something that wants henchmen.

I awarded the party 500 XP for the awesome idea. And forever after, wizards who are In The Know will hunt bugbears for their seeds, just as people hunt dragons and rocs for their eggs today.
at February 23, 2018 8 comments:

The more I play, the bigger hipster I become. I don't like it, but there it is. I'm a snob, and the kind of snob I am is the kind that likes it the way it was in the Old Days. Or, at least how we modern folk perceive it was played in the Old Days.

In my case, I like the idea of limiting everyone to d6s and d20s. That's all you really need. In a way, this is a follow-up post from the last one where I groused about the puny d4 hit points a starting Magic-User gets. That complaint is part of a larger one I guess.

(I'm going to show you the tables I use for character level progression in my game, Mythical Journeys. The game assumes that people are going to use all their dice. But I'll also include a column for how many dice to roll when you are only using d6s.)

For a little while at the very beginning of this hobby, the players only used six-sided dice for Hit Dice, rather than the more glamorous array we use today. Some say it's because those kinds of dice weren't much available back then. But believe it or not, there are good reasons to use only six-siders for these kinds of rolls.

The first reason is that there is symmetry between the different classes. Using only d6s means you can clearly see that, for instance, a level 5 Magic-User is about as tough as a level 3 Fighting-Man, because each has the same number of hit dice.

The second reason is that the player-characters can then use the same Attack Matrix as the monsters do. No longer do you need a different chart for PCs and their allies. Again, you can see how Hit Dice relate precisely to attack ability.

A third, less-obvious reason is that characters with more full hit dice (like Fighting-Men and Dwarves) gain more HP advantage from a high Constitution over time, which maintains balance between the classes a little better.  These three reasons please some players and referees.

But there is a downside.

First, PCs will have on average slightly fewer Hit Points than when you use the several polyhedral dice. It only comes out to about one-half hit point per experience level, but it's worth noting.

Second, part of the fun is rolling the many fun dice. People like dice. Taking the unusual ones out of the rotation may dampen the fun for some folks.

Presented for your use in the extended character level charts below are the alternate Hit Dice progression that uses only d6s alongside the normal progression. Due to the vagaries of the Blogger platform, the charts will be at different font sizes here, even though they are made in the same format on my computer.  As always, click on an image to enbiggify it. 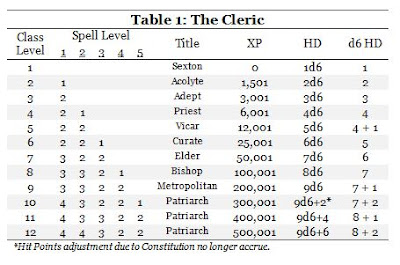 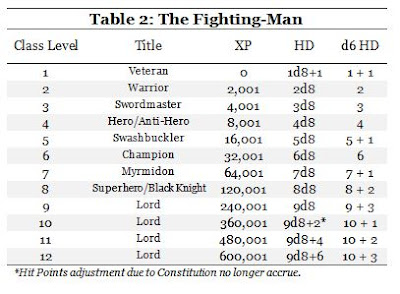 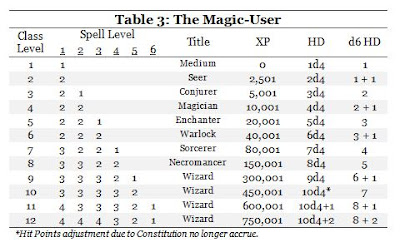 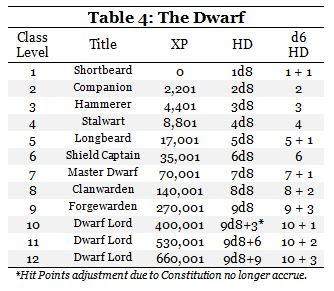 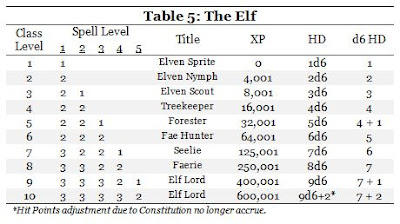 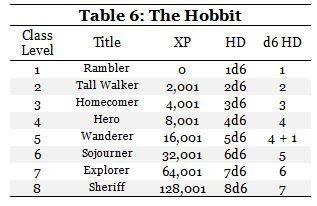 If you make all Hit Dice into six-siders then it makes sense for weapon damage to work the same way. If you do this, then players can give their character the weapon they best imagine rather than picking a weapon that deals the most damage.  Therefore this actually improves the choices for many players. Additionally, since weapon damage is lower overall, the bonus Fighters get from Weapon Specialization and the damage bonus from high Str mean more.

The lower Hit Point totals from all d6s as Hit Dice matches the lower weapon damage output by all d6 weapons.

On the other hand, the same problem happens here as with Hit Dice: people really like rolling the different dice, and this means they get to do it less.
at February 18, 2018 No comments:

1d4 Is Not Enough 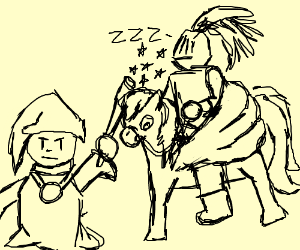 My daughter's friend was rolling up her very first D&D guy today! Yay! She has a new Chaotic magic user who has a goat named Death and a mean streak.

She rolled hit points and got a 1.

And again and again until she hit the jackpot: 4 hit points!!

Um, that's still really lame!  In my case, I would have rolled with the 1 hit point, cause I don't mind death (the existential state or the goat). But for a noob, being a level 1 wizard with one spell seems to be awfully punishing.

YES I know the proper methods to avoid death (theoretically at least) and so forth. But it still seems unusually punishing. 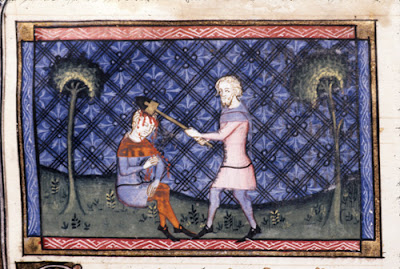 I am a horrible D&D player.

Picture it: I have a little gnome fighter. We try to fight off a Wight without magic weapons. Eventually, we douse it with oil and light it on fire, but I'm reduced to 0 HP. So is one other guy.

They stick me in the corner as we try to find our way out of a certain deathtrap room.

And out pops another Wight!

OH we are SCREWED!

Then I remember, I have a necklace of fireballs with one fireball left. I use it. And predictably, four of us end up at negative HP. The cleric is irretrevably dead. We are able to survive because we had a bunch of potion. But it was a mess, and a preventable one, too.

Picture it: We're creeping up into a completely pitch-dark passage. My druid and the cleric volunteer to follow our guide in even though our infravisions aren't working.  At a certain point, the guide demonstrably huges the wall. We thought it was to let us pass.

And a green slime falls on the cleric! He loses his plate armor, and almost dies!!

I should have seen it coming - the guide knew what was coming. 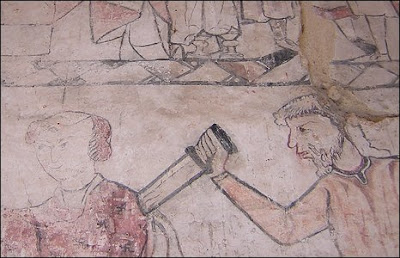 Picture it: I've taken over my daughter's magic-user for the night since she can't come play. He is only level 4 so he doesn't have anything that could really kill us. I used Sleep a couple times to great effect.

Aha, treasure! A Ring of Spell Storing that has one instance of Lightning Bolt in it!

We fight a statue that can shoot lava and it's immune to +1 or worse weapons. So I line up the shot really carefully, so the lightning bolt only hits the statue.

AND SHOWERS US WITH LAVA!!!

The DM rolled max damage and everybody but one person missed their save. And my daughter's wizard was fried instantly. 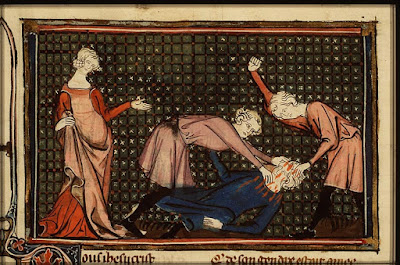 Years ago, our Champions group was in an enemy moon base. My archer shot off a Darkness arrow, blanking everyone's vision except one person.  Then he shot off an Explosion EB arrow, and put a big hole in the station's wall, killing everyone. 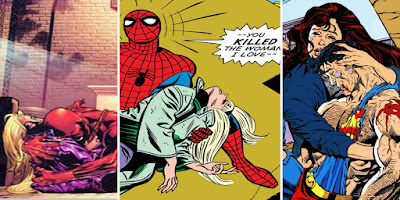 by the way, this is all perfectly OK in a vacuum.

If everyone is fine with regular player deaths, then a killer player is not that much worse than a killer dungeon. But it can get really tiresome for the other players if they're NOT cool with dying every third adventure.

Update on Writing A Novel

You can see the progress I've made here. 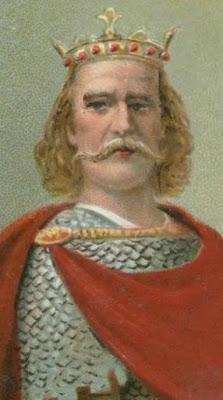 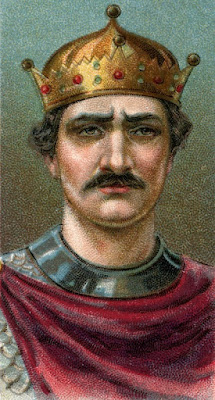 I took a month off from writing. It was at the request of my loved ones, who thought I was too focused on it. Well, it's supposed to be for fun, and it wasn't fun for them to see me throw myself into it, so I stopped. I put the writing process on the shelf (but I couldn't stop thinking about the characters!)

I picked up writing again, and have essentially re-written the first part of the book. That's good. The first nine chapters plus prologue are in the can. That's about 130 pages. I'm happy with them. Nothing is perfect, but I would send them as-is to a publisher tomorrow if that was in the offing.

So, there was a lot of work done. A lot of slogging and upwriting. I also developed the glossary of new and invented words. I will also develop a glossary of existing, but obscure words. (I would also like to make an Appendix with color plates showing the various heraldric devices, and maybe an Appendix with family trees. But those appendices are WAY off in the future, if they ever get made. I do words, not pictures.)

So now we get to the part where it becomes important to introduce Harald and tell about his story. I think I will do it with less dialogue, but it really depends on how much the people want to talk. They act, I report it to you. Harald's story is total Game of Thrones. Treachery and backstabbing galore. It's going to be awesome.

Then I want to talk more about Nesta and Imogen, and bring them to Rouen to meet William. Do some Nesta-William stuff, and do some Nesta-Imogen-Guytonnet-Hyacynthe stuff as they train for battle (to the extent they do train, that's something I have to look at.)

Then I'm not sure. Maybe a little Harold Godwinson?

Then Harald and Harold have the battle at Stamford Bridge. Then Harold books it down to Hastings and William puts him down.

Then what? Prepare to head westward, in hopes of conquering those pesky Welsh. But that is a story for another book.

There's another fellow who is writing fan fiction about Game of Thrones House Lanister who is using the same title: Lions, Red and Gold (ok, his has the comma and mine doesn't, but it's the same thing.)

I am distraught and I do not know what to do. I intend to email him and see whether he's wedded to the title or what.