The DM was Steve. 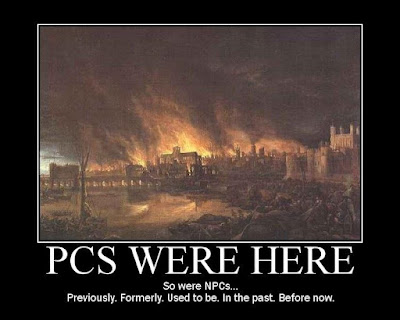 When we last left our murderhobos, Gruffled the plucky halfling thief was down to zero hit points. Yaspar, bother of Vuvier, had poofed away in a treasure room right before the eyes of his charge, Thane the magic user.

I'm skipping over some fighting and stuff from the last session because I didn't find it to make for compelling recapitulation. But there were some hogoblins and a gelatinous cube and some thouls expertly RPed by DM Steve.

The rest of the PCs to my astonishment poked around in the place where Yaspar had simply disappeared, and then decided to follow him!  We all found ourselves teleported into a room full of sarcophagi - and no exits!  It was a simple and deadly stone tomb!

So with little other option, we started pushing the tops of the sarcophagi and to our delight, many of them held rich treasures in coins of various kinds!  But to our dismay, we could not get them out again because, remember, no door.

So we kept opening them until to our horror a Wight popped out of one and stole two levels! One from Yaspar (making him a Level 0) and one from our magic user Thane, who then lost his second-level spell Web, which could have helped.  He also took Yaspar down to -2 hit points and started to munch on him.  So our cleric, Raven, having failed four turn undead checks, doused the restless dead with oil and threw a torch!  But the oil had gotten on Yaspar as well, and the two of them burned like so much crispy bacon in a frying pan.

Raven then cast healing spells on Yaspar to get him up to 0 hits and on his feet, but he was fried, he'd lost a finger, and half his face was eaten off.  It was awful!  His brother Vuvier threw his wolf-pelt over his injured brother and Yaspar thanked the gods for his "good" luck.

In the process of opening the rest of the sarcophagi (remember, we are still looking for an escape route), there was another Wight!!  We had almost been TPKed from the last one so Yaspar stood and threw his mysterious, magical necklace at the thing.  I didn't really know what it was but I guessed right: it exploded into the most deadly 6d6 Fire Ball ever seen (27 Hit Points).  The Wight and cleric Raven were immediately disintegrated, and everyone else besides Yaspar and Gruffled (both at this point outside the radius) were between -1 and -10 hits.

First, Yaspar grabbed the two potions of Climbing on his brother's dying body and mixed them together.  He fed them to Thane, our last magical character in hopes Thane could help.  It turns out, the postions mixed to make... a double strength potion of Climbing.  We had a corpse that could stick to walls!

So we had five characters with 0 hits between them and minus two levels.  We had the burnt corpse of a cleric.  We had loads of treasure but no way to get back to daylight.  And we were very low on rations - just two days' left.  The Fire Ball had cooked most of our water and killed the six-legged frog, Jane.

We did however find the special magic item we were sent to get - an evil book.  A book, in fact, that zapped Vuvier back into a coma!

After some fadiddling with the doodly-doo, we figured out how to get out.  I don't want to tell you more because it would spoil the tricks and traps in that one awful room.  As it turns out we found out how to get back in and out safely and without anyone noticing us later, so we did all get very rich.

So when Yaspar went into that room, he intended to come out RICH, marry a pretty girl, have lots of babies, and start a gnome town.  When he left he was a hideous bacon-like husk in a wolf pelt without any levels.  He decided to dedicate his life to Raven's church and order in her honor.  When the high priestess (they're all girl priests) of Freya came, we paid her to Resurrect Raven, awaken Vuvier and Restore Thane's lost level.  Then we awarded XP to everyone but Raven and Yaspar, and they all leveled up.

You see, Raven decided to retire from adventuring, having been cooked to death.  She escorted 0-Level Yaspar back to their temple to begin his training as a priestess of Freya!  They'd never had a boy or a gnome priest before, but they're gonna give it a shot.

Gruffled decided to take it easy for a while.  He may decide to come back to adventure with us some day.  He's not retired but he's going to take his money and have a good time.

Lord Clifton was a jerk.  First he promised we could keep what we took out of the dungeon, and then he demanded his share.  So we hid our money from him, bid him good day and fare thee well, and began to scheme about raising an army and taking his castle away to use as our own when we got high enough level!

Next time, two or three new PCs will be joining us.  Nate wants to play a Dwarf Fighting Man.  AJ will be joining as a player and we don't know who she will play.  Simone did not want to be a Cleric anymore (hence the retirement of Raven to NPC status) and she might also play a fighter.