From the beginning of this campaign idea and really from long ago, I had a kernel of an idea that a campaign ought not be rushed.

But D&D nowadays is built for people who can only play twice a month or something. It's meant to be fast in game terms to compensate for slow in real world time.

Grand and sweeping epics, this is just not the speed of play that D&D is built for. D&D is built to level you up FAST.

In 3.x for instance, a group of characters who hustled could go from level 1 to level 20 in about three months of game time if they really wanted to. 25 encounters in a week nets you almost two experience levels.

In older editions the rate wasn't quite as bad because it slowed down at higher levels much faster than 3.X does, which is built with increasing XP awards for high level encounters baked in through the concept of CR, and monsters for XP, and a few other mechanicals. But the premise is still there: making it from level 1 to level 9 in 50 adventures (about a year of regular play) is pretty common.

Your experience may vary because you may be a languid player. I've seen both. I've seen Dragonlance PCs cap out twice a year (18 level cap) and I've seen guys get to level 6 in two years of biweekly. But even in that latter case, the calendar barely moved in game time.

And that's the key: the in-game calendar barely moves.

Do you know how long it took the hobbits to get to Mount Doom and back? You do! 13 months.

And in a normal D&D campaign, a character would be like level 40 before the calendar moved off of, say, "midsummer."

Part of that is having a calendar and weather, but part of it is just the way D&D seems to go.

I don't want my player character to go back to high school a level 20 wizard. I want a grand sweep of history. I want the PC's kids to take up their mantle within a reasonable amount of game time.

To solve the time issue, I'm going to be using a concept called the Grand Turn. That is, we will take time to enjoy each season in a year. 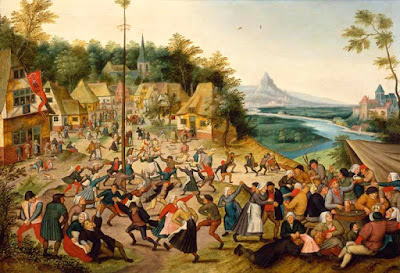 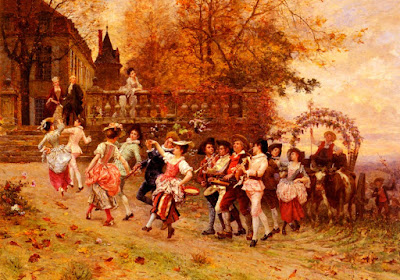 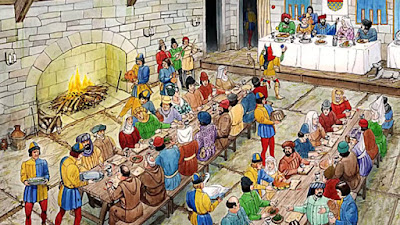 Then we move the calendar forward a year of game time. People grow and age. The world changes a little.

Traveling around in Port between districts is fraught with danger, so there are chances for mini-dungeon delves and random encounters during each of the four seasons in the inner wilderness. And during each season there will also be at least one holiday festival should the PCs wish to participate.

For the mini-adventures moving around town, I will use a wandering monster list I made up for the purpose. When you change districts, there will be a 2-in-6 chance you encounter something bad. Paying someone to be your guide reduces the chance to 1-in-6. On that encounter chart, half the results will be a ruined mini dungeon. Or if you want to, you can wander around until you find one. I'll be using the Donjon generator to whip them up on the fly.

The Hazard Die is a manifestation of Lady Fortuna shining down upon the city, the guilds and noble houses, and ultimately the player characters. It comes from the Hazard System by Brendan of Necropraxis.

For the wars, I'll be using the Horrible Medieval Wars generators. These include two short tables to spur my imagination about the reason for the war (this time) and the belligerents; and two nice charts designed by Skerples.

For the dynastic advancement, I'm not really sure what I'm going to do. But I'm going to crib from Pendragon (first edition happens to be freeware).

For town, festival and rumor adventure hooks I'll be using random charts developed by Chris Tamm of Elfmaids and Octopi. (As an aside, no matter how much creative output you can manage, Chris Tamm can put out three times as much. While riding the bus. He's amazing.)