I'm going to try being prepared for this campaign, which is something I've heard some people try doing. One of the things I will have in hand hiding behind my Ref screen is pages of NPCs.

There will be a number of them that have stats because they may end up going on adventures. and then another group that only have a little bit of info that will let me drop them in whenever an NPC is needed. Doing it this way will keep the various NPCs feeling like real people rather than just randos.

Let me again stress that I made these up using online resources. I think some of it comes again from Skerples but a lot of them come from places I can't remember where they're from, and then a bunch of other ones I just made up myself.

RANDOM NPCs - These are townsfolk you might bump into. Not statted out because there are quite enough in the other document if you need to take someone into the dungeon. 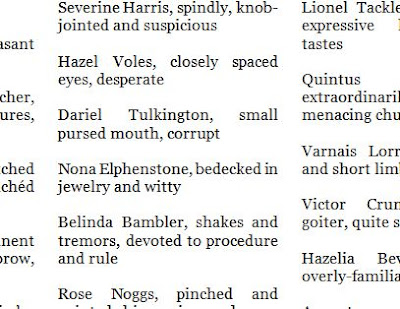 Email ThisBlogThis!Share to TwitterShare to FacebookShare to Pinterest
Labels: OSR