Why not? Again - watching the Matt Colville 5e live streamed game has made me think about having a goblin as a PC.  I would not want one in my Fallen Empire setting but it might be an interesting idea at some point. So I wrote it up with Mythical Journeys flavor. 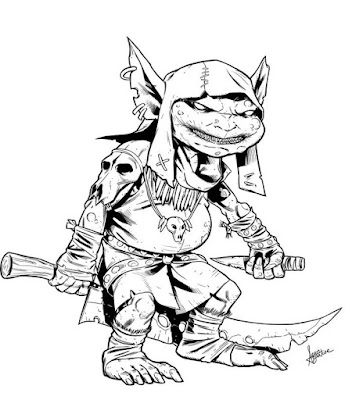 Goblins are individually the weakest of all monstrous humanoids. Even orcs and kobolds look down upon these pitiful creatures. However, they are shifty, hardy and resourceful, and they have shown the ability in rare cases to learn how to become adventurers and not merely adventurer-fodder.

If one were to be separated from his warren and made to be civilized, he might someday become as useful as a savage of any of the humanoid races in the Realm of Men, if one were able to get him to stop eating out of the garbage and stealing everything on sight.

EDITS: Based on comments on G+ I have made a couple of changes. They are marked in Orange and also corrected on the linked word doc.

The Prime Requisite of the Goblin is Dexterity.

Goblins must have a minimum Dexterity and Constitution of 9 when beginning play. They may not have an Intelligence greater than 14 or a Strength greater than 15.

Arms & Armor: A Goblin may use any armor without penalty but it must be sized properly for him. He may use small weapons such as those a Man could use in one hand, just like a Hobbit can.

Darkvision: Goblins can see perfectly well in the dark out to 60’, but even a candles-worth of light will spoil this Darkvision.

Static Hide: Indoors, a goblin can hide behind even the most pitiful of cover 5-in-6 4-in-6 times. Both are modified by Dex and armor as normal. Outdoors, he can hide 3-in-6 times. He will always think himself well-hidden regardless. Magical light will spoil this ability, however.

Pick Pockets and Move Silently: Pick Pockets allows the Goblin to try to perform preternatural acts of prestidigitation and Move Silently allows him to move absolutely and completely silently. Normally, the player can just roll normal checks to try mundane stealing and sneaking like any other character.

To attempt these skill uses, roll 2d6 and add Dex bonus. If the result is equal to or higher than the number shown, the check succeeds. See Table 1.

Surprise Attack: When attacking from surprise and within 30’, the Goblin may make one special attack at +4 that deals double damage on a hit. At level 4, this becomes treble damage, and at level 8, four-times damage. Unlike the Backstab ability, this attack does not need to be from behind; only from surprise. This attack only works against living corporeal creatures with a discernable anatomy.

Goblin Limitations: No one likes or respects goblins. Many people would kill him on sight, so he must be very careful. While all goblins start at level 1 with the Chaotic alignment, they may change it through play if they wish.

Therefore Goblins receive a -2 to all reaction rolls except with other goblins or their personal friends; no exceptions.

Get It Here: Goblin Class for Basic.docx