The Lawful and the Good

Let's you and me roll this one out on the ball field and play a few innings. 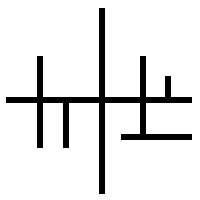 I'm going to do this off the cuff and I'm not going to appeal to any primary or secondary sources. This is just me putting my stakes in the ground and marking off the garden plots in which my setting is planted.

Last time, I made the statement that D&D is explicitly a role-playing game and not a wargame or board game or something else. I feel confident making this statement because I am able to present an incredibly strong piece of evidence: Alignment exists and it has game mechanical impact. You may have a different opinion, which is very fair. It's an open question.

So that's the first thing: Alignment exists and you can't take it out of the game without changing the game in a significant way.

But here's the other part of that: the Alignment system makes a strong statement about the implied setting: that is, morality is woven into the fabric of the Cosmos; that every version of D&D has a cosmogony and that Alignment necessarily follows from those cosmogonies.

Three-Point alignment is something I feel like I have a really good grasp on because I'm able to explain how it works in the game to a new player. I can also explain fairly easily how a particular character can achieve any of the three alignments.

Now excuse me while I prepare to tell you what I mean.

*puts on football helmet and ties mattresses to chest and back*

So the way you explain it to the new player (or the player new to three-point alignment) is "Lawful characters always try to do the right thing AND advance civilization."

Some races are naturally Lawful. They are born that way.

This means they have no choice but to try to do the right thing and advance civilization - in this case, civilization as conceived by the cultures of Men.

Some races are like that. But not Men. Men have choice. Men are not born with any particular alignment. Men can choose which alignment to be. Or a man can choose not to choose.

The vast majority of Men do not choose. They are neutrals (small n.)

Neutral with a capital N means that the individual is actively seeking balance. He may try to do the right thing most of the time, but he's not interested in either advancing or reversing the spread of Civilization.

Neutral with a small n means the individual has not given a lot of thought to morality or ethics, and is mostly out for himself.

In my opinion, 75-80% of all Men are small-n neutrals; most players play their PCs that way too.

Men can also choose to be Chaotics. Chaotics are basically up to no good. They may go out of their way to screw things up. They may aid the enemies of civilization or Mankind. They are not merely working for a different Lord or religion, but they are working to sabotage that which is orderly.

Additionally, a lot of monsters are naturally Chaotics even though they live orderly lives. This is because they oppose Mankind's expansion and civilization. Example: A Hobgoblin is quite orderly. He is in control of himself and knows exactly his place in the hierarchy and how to comport himself within his culture at all times. But he is still a Chaotic because he is part of a force fighting against the civilizations of Men.

Incidentally, if you were able to somehow separate one Hobgoblin from his society and make him a citizen of a realm of Men, he would probably be quite Lawful because he would behave in a way similar to his former life.

How to Select Your Alignment

Most monstrous races, almost all animals, and most NPCs from the common races allied to Men have little or no choice in their alignment. Even most Men choose not to choose! But a few players (and a few characters) do choose. Choosing to be Lawful or Chaotic or affirmatively Neutral requires two steps:

1) Stating, at least to yourself, that you intend to act in a certain way.

We can assume that any character entering the game with a non-neutral alignment has made this decision beforehand.
at February 28, 2019